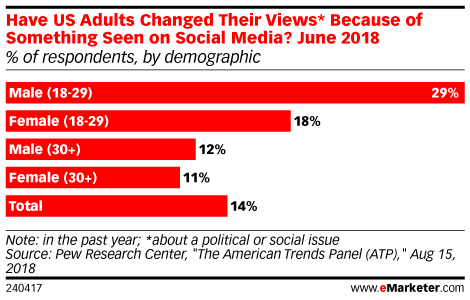 We may believe we’re each living in our own social media bubble full of like-minded folks, but survey data suggests that some of us are being persuaded to change our minds thanks to social posts.

A Pew Research Center survey found that 14% of US adults said they had changed their views over the past year because of something they saw in their social feeds.

That was the average across all age, demographic and political groups, but certain groups were considerably more likely to say that their minds had been changed. At the top of the list: young men ages 18 to 29. Nearly one-third said their views had changed thanks to social media.

In general, younger people were more apt to say their minds had changed. Viewpoints seemed to harden among the older respondents. Among the youngest group (ages 18 to 29), 23% said they had changed; among the oldest (ages 65 and older), just 6%. Read the rest at eMarketer.