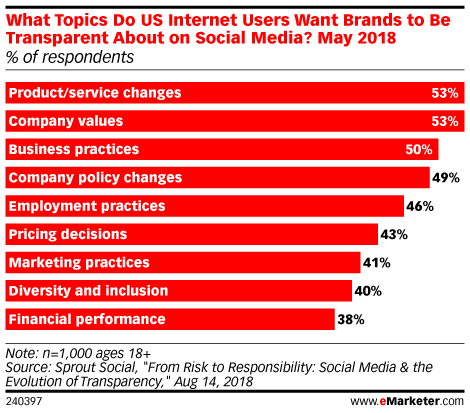 Not only do consumers want businesses to be open and honest in their social posts, consumers actually hold businesses to a higher standard than they hold for themselves.

In a new study from Sprout Social, consumers singled out brands as the group with the greatest responsibility to be “transparent” on social media, a broad term but one that the survey suggests includes honesty, openness, clarity and even authenticity.

More than three-quarters of the consumers (81%) surveyed said brands must be transparent on social media. By comparison, only 71% said that they themselves had a responsibility to be transparent. Celebrities got an even bigger pass, with just 57% of respondents holding them to that standard of behavior.

What demonstrates a lack of transparency? The two most cited behaviors included “withholding information” and “ignoring customer questions.” But the respondents also expressed concerns about companies that ignore employee questions as well. Read the rest at eMarketer.