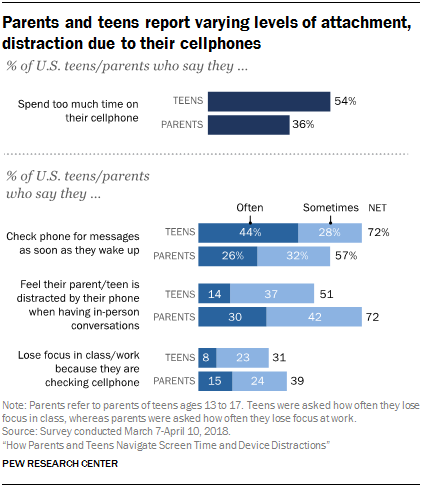 Amid roiling debates about the impact of screen time on teenagers, roughly half of those ages 13 to 17 are themselves worried they spend too much time on their cellphones. Some 52% of U.S. teens report taking steps to cut back on their mobile phone use, and similar shares have tried to limit their use of social media (57%) or video games (58%), a new Pew Research Center survey finds.

Teens’ sometimes hyperconnected relationship with their devices is also evident in other findings from the Center. Fully 72% of teens say they often or sometimes check for messages or notifications as soon as they wake up, while roughly four-in-ten say they feel anxious when they do not have their cellphone with them. Overall, 56% of teens associate the absence of their cellphone with at least one of these three emotions: loneliness, being upset or feeling anxious. Additionally, girls are more likely than boys to feel anxious or lonely without their cellphone.

Parents, too, are anxious about the effects of screen time on their children, a separate survey shows. Roughly two-thirds of parents say they are concerned about their teen spending too much time in front of screens, and 57% report setting screen time restrictions for their teen in one way or another. Read the rest at Pew Internet.