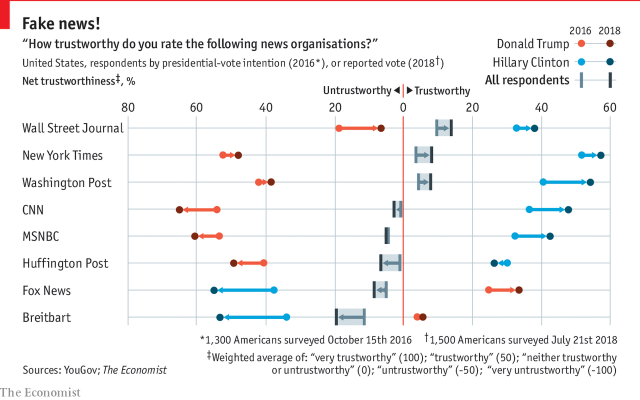 On July 29th Mr Trump invoked his favourite scapegoat once again. The president described as “very good and interesting” a meeting with the publisher of the New York Times, A.G. Sulzberger, in which he claimed they “spent much time talking about…[how] Fake News has morphed into phrase, ‘Enemy of the People.’” (Mr Sulzberger later said he had implored the president during their meeting to tone down his rhetoric regarding the press, lest it incite violence against journalists.) Shortly thereafter, Mr Trump fired off a series of tweets claiming that the “failing” New York Times and “Amazon” Washington Post —so nicknamed because Amazon’s boss, Jeff Bezos, owns the newspaper—are “dying”, and that “confidence in the media is at an all time low”.

So far, however, Mr Trump’s broadsides have failed to dent faith in his targets. On behalf of The Economist, during the past three years YouGov, a pollster, has asked a representative sample of Americans to rate large American news organisations on a scale from “very trustworthy” to “very untrustworthy”. Read the rest at The Economist.