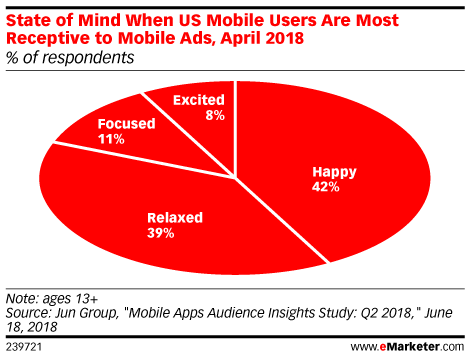 Is mobile gaming a relaxing pastime? Nearly 40% of players think so, which is good news for mobile ad buyers, because many gamers say they tend to be more receptive to ads when they’re in a relaxed mood.

In a recent survey of 500 US mobile gamers conducted by mobile advertising company Jun Group, 81% of respondents said they’re most open to digital ads when they’re either relaxed or happy.

The Jun Group survey found that game players don’t necessarily think of themselves as “gamers.” A full 58% of regular mobile game players said “gamer” does not apply to them, and women were far more likely to reject the term.

Meanwhile, the survey also uncovered little resistance to ads in games. Some 82% of respondents said they prefer ad-supported apps over paid, ad-free versions. Read the rest at eMarketer.