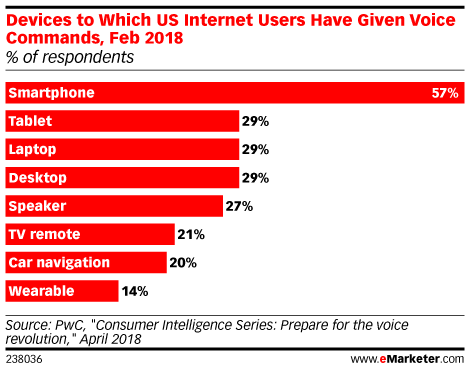 By all accounts, the use of voice control technologies is growing around the globe. Here in the US, eMarketer’s latest forecast expects the number of smart speaker users to rise at a compound annual growth rate (CAGR) of 47.9% between 2016 and 2020, from 16.0 million to 76.5 million. In 2018, more than 18% of the US population and 21.9% of internet users will use a smart speaker at least once a month.

Meanwhile, Juniper Research has forecast that by 2022, more than 5 billion voice assistants will be in use on smartphones worldwide (taking into account that multiple assistants may be installed on a single device). The firm also predicted that in the US alone there will be 870 million voice assistant devices on all platforms and form factors combined—including smartphones, tablets, PCs, smart speakers, connected TVs, cars and wearables. This is nearly double the estimated 450 million in 2017.

Apple’s introduction of Siri signaled the first voice assistant push into the mobile ecosystem, which has grown to include smartphones, tablets, headphones, wearables, laptops and other portable personal gadgets. Not surprisingly, however, the majority of voice assistant use still takes place on smartphones. According to a February survey by PwC, 57% of US internet users who had spoken to a device had done so on a smartphone, far outpacing other devices. Read the rest at eMarketer.