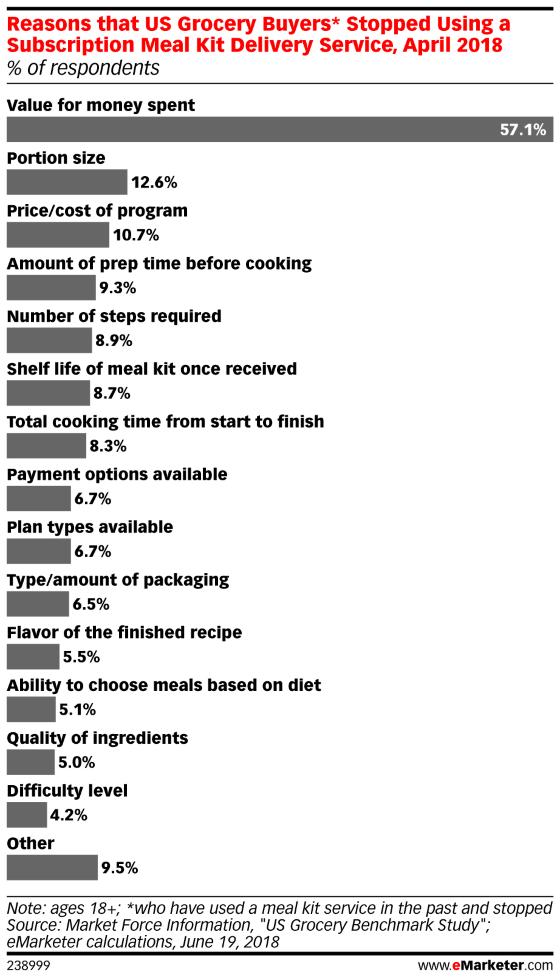 According to an April 2018 Market Force Information survey of US grocery buyers, 27% buy prepared food weekly or more, and 92% cited convenience as the reason. Prepared foods was also the top merchandising enhancement for 2018, according to 73.2% of US grocery executives surveyed by Progressive Grocer.

But according to the Market Force survey, only 15% of respondents have ever tried a subscription meal kit service (though that’s up 4 percentage points from 2017). There doesn’t appear to be a great deal of pent-up demand, either. In a Q4 2017 IRI survey asking US internet users which shopping activities they planned to conduct in 2018, just 6% said online meal kit delivery services.

The top reasons for subscribing to a meal kit were different from motivations for buying prepared food. According to Market Force, half of those surveyed were adding variety to meal planning and 44% wanted to have a fun experience. Saving time was also important (cited by 41%) but not the primary driver. Just over half were satisfied with their subscription. Read the rest at eMarketer.