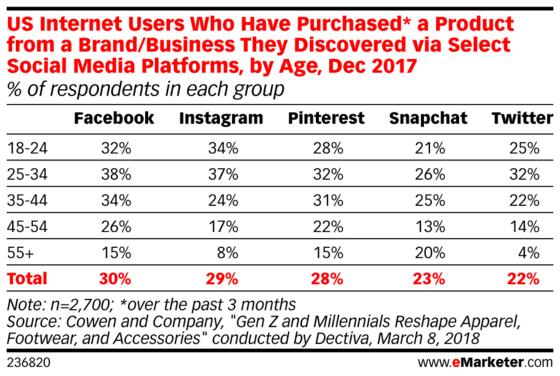 Looking at individual social media platforms, around one in four US internet users had bought a product they discovered on Instagram or Snapchat, according to a December 2017 Cowen and Company survey. Millennials had higher incidences of being inspired by Instagram to make a purchase, though buying spurred by Snapchat was more evenly distributed by age.

These latest monetizing strategies focus on Stories, a feature Snapchat was built on and Instagram appropriated nearly two years ago—apparently to great success. At last month’s F8 conference, Mark Zuckerberg said Facebook had “gone all in on Stories” across all of its properties. And Facebook chief product officer Chris Cox revealed that “the Stories format is on a path to surpass feeds as the primary way people share stuff with their friends sometime next year.”

A December 2017 RBC Capital Markets survey found that 24% of US Instagram users view Stories daily, up from 19% in June 2017. And 28% of Snapchat users said Stories was the platform’s most important feature. But far more Snapchat users valued chat and photo messaging (68%). Read the rest at eMarketer.