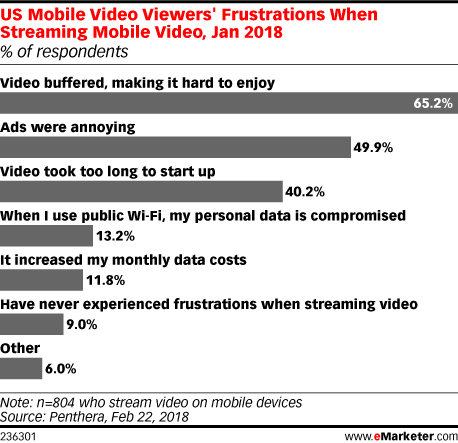 There are few things more frustrating for cord-cutters than getting home from a long day’s work and queuing up their favorite show online as they kick back on the couch, only to realize they can’t watch in peace and harmony because the video won’t load correctly.

According to a survey of US mobile video viewers by Penthera, what annoys people most when they stream video is the frequent buffering.

Almost 60% of respondents said they’re frustrated with their mobile video viewing experience at least half of the time. And when these viewers get frustrated with streaming services, 53.5% of them give up on the video and try it again later. What’s more, roughly one-fourth said they stop using a particular service altogether. Read the rest at eMarketer.