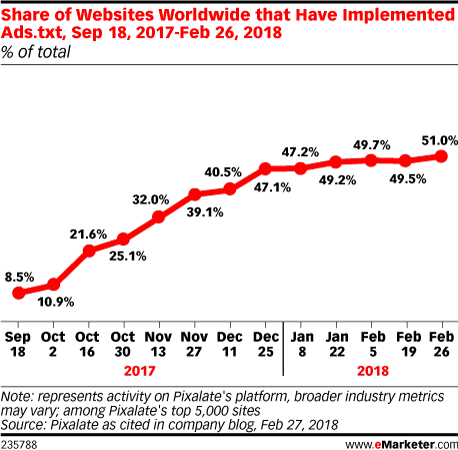 Ads.txt has emerged as a trend within programmatic advertising over the past year, so you better get used to it.

Last May, the Interactive Advertising Bureau (IAB) Tech Lab launched ads.txt, which is a text file on publishers’ sites that lists all the vendors that are authorized to sell their inventory. Because domain spoofing and arbitrage have plagued programmatic advertising, ads.txt was created so that ad buyers could have a tool to check whether a vendor’s claim to a piece of inventory was legitimate or not.

Adoption of ads.txt was slow at first, but it has really taken off over the past five months. In September 2017, just 8.5% of the top 5,000 websites worldwide selling programmatic ads had adopted ads.txt, according to Pixalate, which used Alexa rankings to score the popularity of websites. But by the end of February 2018, more than half of these sites were using ads.txt. Read the rest at eMarketer.