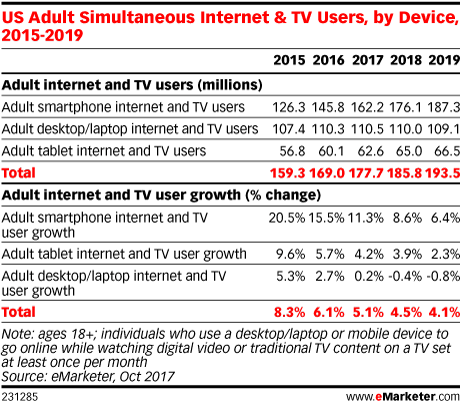 The simultaneous use of second-screen devices—smartphones, tablets and desktops/laptops—while watching TV has increased year to year and will continue through at least 2019.

However, 2018 will be the first year in eMarketer’s forecast in which the use of desktops/laptops in this context declines.

As with other demographically segmented data, a survey of US internet users by YuMe and Nielsen showed correlations between age and simultaneous device use.

Millennials—defined as those ages 20 to 36 in this study—showed higher rates of simultaneous use of TV with smartphones and desktops/laptops than their older counterparts. The exception was tablets, which Millennials were slightly less apt to use than older adults. Read the rest at eMarketer.