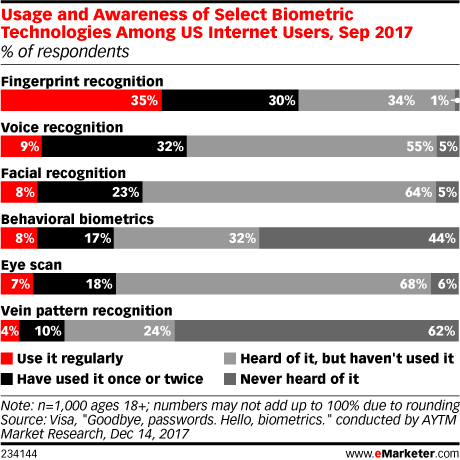 Many consumers are likely not running out to buy a device with biometrics because such devices are pricey. Indeed, Apple’s iPhone X is the manufacturer’s most expensive device to date. And spending that much money on a device that opens your phone by recognizing your face—as opposed to a fingerprint or pass code—may not be reason enough for many people.

According to September 2017 survey of US internet users by AYTM Market Research for Visa, fingerprint recognition is the most commonly used and known biometric technology among respondents.

In fact, 35% of internet users polled said they used it regularly. Facial recognition was used by less than 10% of respondents, though a large share (64%) were aware of the technology. Read the rest at eMarketer.