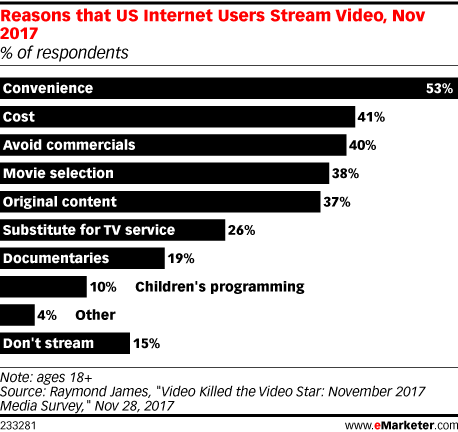 The dramatic rise of Netflix and other over-the-top (OTT) video services has fundamentally changed viewing habits in the US, especially among younger users, but in the short run it can be easy to overrate that change.

A November 2017 survey of US internet users by Raymond James highlighted that dynamic, noting that while streaming is gaining share from TV, the two video formats coexist. Change is underway, the study found, but the effects are subtle and the pace of change is slow. For instance, 55% of respondents said they plan to keep their TV package unchanged over the next 12 months. That’s little changed from the results of the survey over the past three years.

Part of the reason for the slow evolution, according to the financial firm, is that the reasons for watching TV, such as sports and news, are complementary to the reasons for streaming, such as cost and convenience. Read the rest at eMarketer.