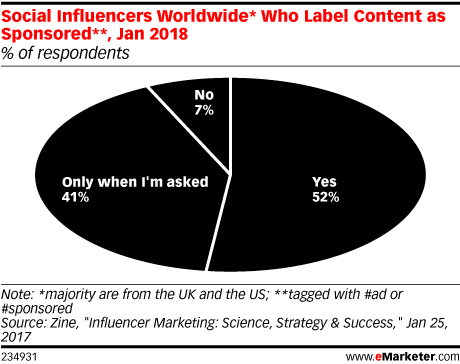 Influencer marketing has gotten big enough that disclosing ties between brands and influencers is a necessity, not an option. Although compliance is growing, there are many examples where it doesn’t happen.

Marketers and influencers that don’t disclose put themselves at risk for Federal Trade Commission (FTC) scrutiny and consumer backlash, both of which are rising.

According to a January 2018 survey of influencers worldwide from Zine, 52% of respondents said they labeled their content as sponsored. But the role of marketers in encouraging (or discouraging) disclosure is strong. In Zine’s study, more than four in 10 influencers said they only labeled when asked to, and 7% said they never did. Read the rest at eMarketer.