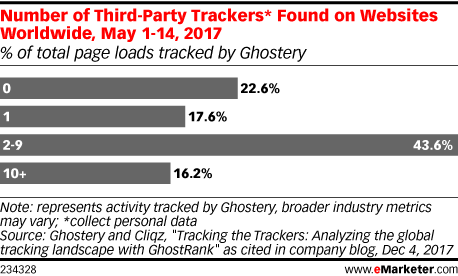 Tracking pixels and scripts are often little understood, but they serve as the lifeblood of many data-driven digital campaigns.

But just how prevalent are these tools on the web? In a recent examination of more than 144 million webpages loaded in more than a dozen countries, Cliqz and Ghostery found that 77.4% of all websites had at least one third-party tracker.

In addition, the analysis revealed that a sizable minority of websites examined—16.2%—featured 10 or more trackers. Read the rest at eMarketer.