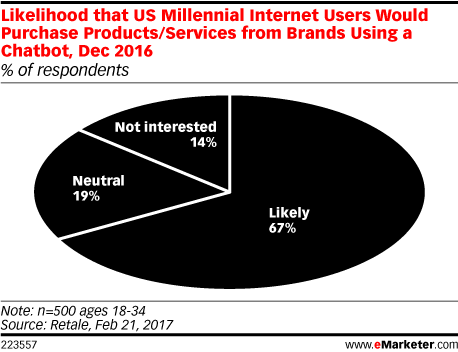 There’s been a lot of buzz surrounding chatbots in retail, though this may be based more on hype than actual usage. But if there’s one particular group of adults likely to use chatbots for shopping-related activities, it’s millennials.

In a December 2016 survey by Retale, nearly 60% of US millennials said they have used a chatbot. More than half of those who had never used a chatbot said they’d be interested in trying one.

Retale—which recently launched RetaleBot, its own shopping-related bot—also found that millennials are open to making purchases from chatbots. Two-thirds of respondents said they’d be likely to buy an item directly from a chatbot, vs. only 14% who said they would not be interested in doing so. Read the rest at eMarketer.