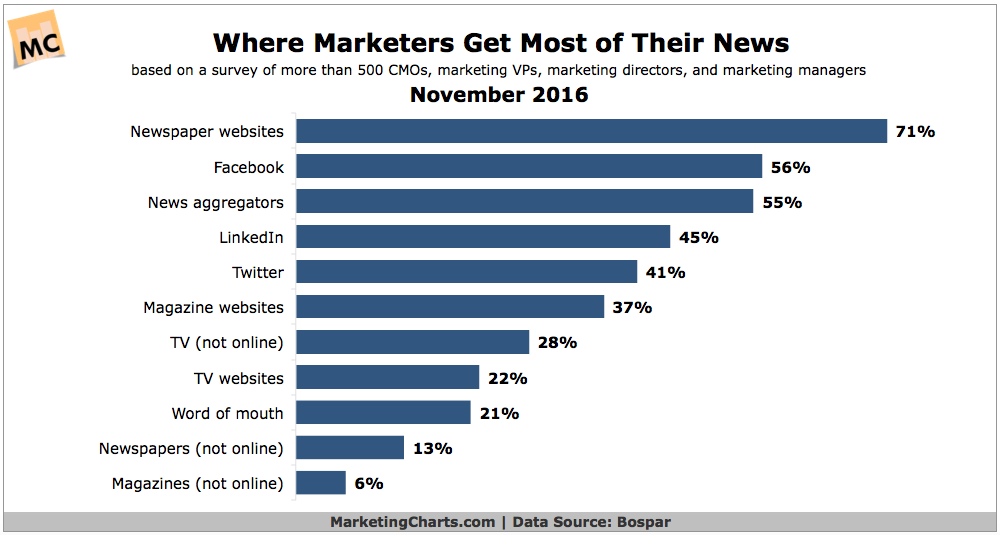 Forget offline channels. Marketers are turning to online media to get their news, and that has implications for PR placements, according to a new study from Bospar. Based on a survey of more than 500 CMOs, marketing VPs, marketing directors and marketing managers, the study indicates that marketers are most apt to consume media via newspaper websites (71%), Facebook (56%) and news aggregators (55%).

Other social channels such as LinkedIn (45%) and Twitter (41%) are also important vehicles, per the report, while offline TV (28%), print newspapers (13%) and print magazines (6%) figure much less prominently.

With almost 8 in 10 respondents saying they’d be either somewhat likely (75%) or very likely (4%) to buy a B2B product or service after seeing it in the media, this suggests that online media coverage is important for companies. In fact, a slight majority (52%) of CMO and marketing VP respondents to the survey claimed that a single time seeing media coverage of a company would be enough to motivate them to visit the company’s web or mobile site. Still, launch campaigns aren’t enough in and of themselves to persuade some senior marketers: more than one-third (35%) would need to see a story multiple (2-5 times) in order to visit the company’s online presence. Read the rest at MarketingCharts.com.