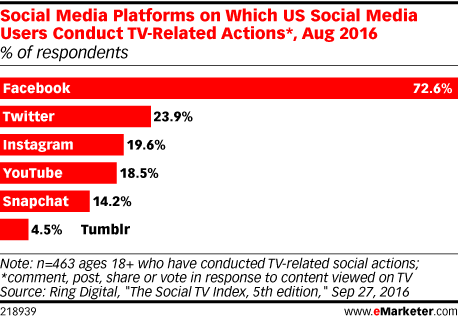 Indeed, social media users were more than three times as likely to conduct TV-related actions on Facebook than they were on Twitter, including commenting, posting, sharing or voting in response to content they saw on TV. And they were nearly four times as likely to do so on Facebook than on Instagram, the study from Ring Digital, a marketing and product strategy firm for the TV and video industry, found.

That’s not really that surprising given that Facebook’s user base is so huge. This year, there will be 143.5 million US Facebook users, according to eMarketer. To compare, Twitter has 52.2 million users, Instagram has 67.2 million, Snapchat has 58.6 million and Tumblr has 23.2 million. YouTube does have more US users than Facebook does—180.1 million—but YouTube activity is not really centered around communication like status updates or discussions. Read the rest at eMarketer.