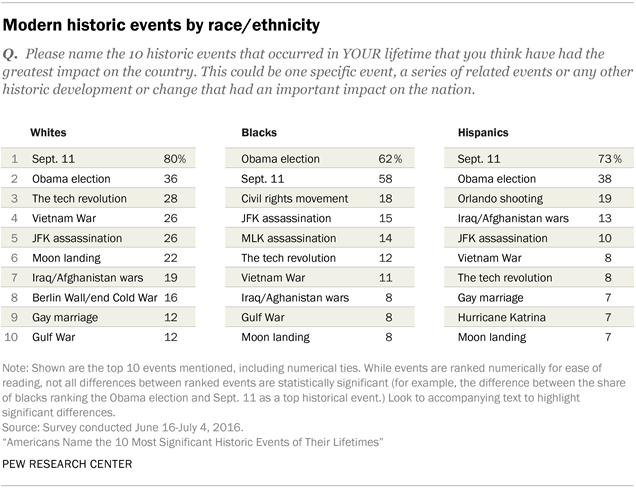 The perceived historic importance of the attacks on New York and the Pentagon, span virtually every traditional demographic divide. Majorities of men and women, Millennials and Baby Boomers, Americans with college degrees and those without a high school diploma rate 9/11 as one of the 10 most historically significant events to occur during their lifetime. And while they seem to agree on little else this election year, the survey finds that more than seven-in-ten Republicans and Democrats name the attacks as one of their top 10 historic events.

Blacks and whites view recent history differently in several key ways, beginning at the very top of the rankings: Blacks are the only demographic group in which any other historic event challenges the prominence of Sept. 11 in importance. Specifically, among blacks, as many people (roughly six-in-ten) named Barack Obama’s election as one of the top 10 historic events of their lifetime as named Sept. 11. Among whites, Obama’s election ranks a distant second (36%) compared with the 80% who name Sept. 11.

Not surprisingly, events related to the black struggle for equal rights also have particular relevance to black Americans, though far less so for whites. Among blacks, 18% say the civil rights movement is one of the 10 most significant events to occur during their lifetimes. By contrast, only 8% of whites cite the civil rights movement – and it fails to make their top 10 events list.

Even though the fight for black equality continues today, the civil rights movement is more salient to blacks who lived during the 1960s, when many of the seminal events of the movement occurred. Among blacks ages 45 and older, roughly a third (32%) rate the struggle for equal rights as a touchstone event in their lives.

On six of the eight events that appeared on both lists, significantly smaller proportions of blacks view the event as impactful compared with whites. For example, the tech revolution appears on both top 10 lists and is cited by 28% of whites but only 12% of blacks. Similarly, the Vietnam War is cited by 26% of whites but 11% of blacks. Read the Rest at PewResearchCenter.