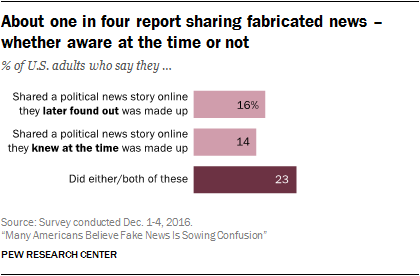 Some Americans say they have contributed directly to the distribution of fake news by sharing it themselves. About a quarter (23%) say they have ever shared such stories, while roughly equal portions say they have shared made-up news knowingly and unknowingly.

A similar percentage, 14%, say they have shared fake news they knew was made-up – whether because they want to spread misinformation, to “call out” the stories as fake, for the amusement value, or for some other reason.