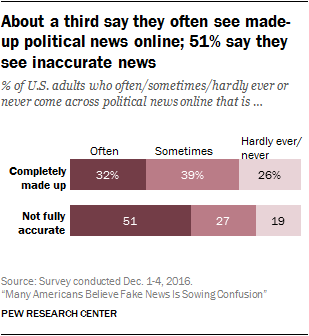 Nearly one-in-three U.S. adults (32%) say they often see fake political news online, while 39% sometimes see such stories and 26% hardly ever or never do. In a rare instance of demographic differences, whites are more likely than blacks and Hispanics to say they often see fake news, and those with annual incomes of at least $75,000 are more likely than those who make less than $75,000 to say so.

To be sure, there are limits to what this self-reported information can capture, as it cannot determine whether these levels of confidence are truly warranted. There could, for example, be more fake news on the internet that goes unnoticed (despite high confidence in one’s ability to detect it) or some news that is erroneously thought to be made up. Further research could help tease out these different possibilities. What’s clear even now, however, is that Americans perceive fake political news stories to be a consistent threat online – but see themselves as fairly adept at detecting when a story is made-up.  Read the rest at PewResearch.