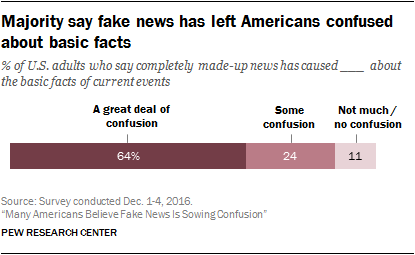 According to a new survey by Pew Research Center, most Americans suspect that made-up news is having an impact. About two-in-three U.S. adults (64%) say fabricated news stories cause a great deal of confusion about the basic facts of current issues and events. This sense is shared widely across incomes, education levels, partisan affiliations and most other demographic characteristics. These results come from a survey of 1,002 U.S. adults conducted from Dec. 1 to 4, 2016. Read the rest at PewResearch.