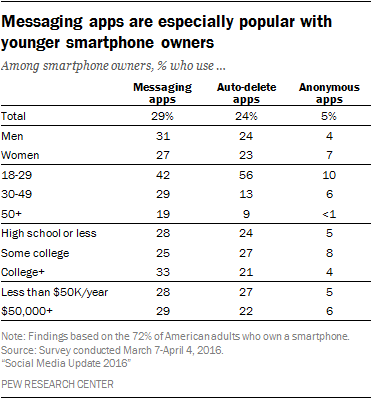 Social media sites are not the only venue where people can connect with others online. Today smartphone owners (at the time of this survey, 72% of American adults) can choose from a variety of messaging apps that fill many of the same functions. Some of these apps look and function like a traditional chat or messaging service, while others offer unique features – such as the ability to post anonymously, or to have one’s posts expire or delete themselves after they are viewed.

This survey asked about three different types of messaging apps that people might have on their smartphones and found that: