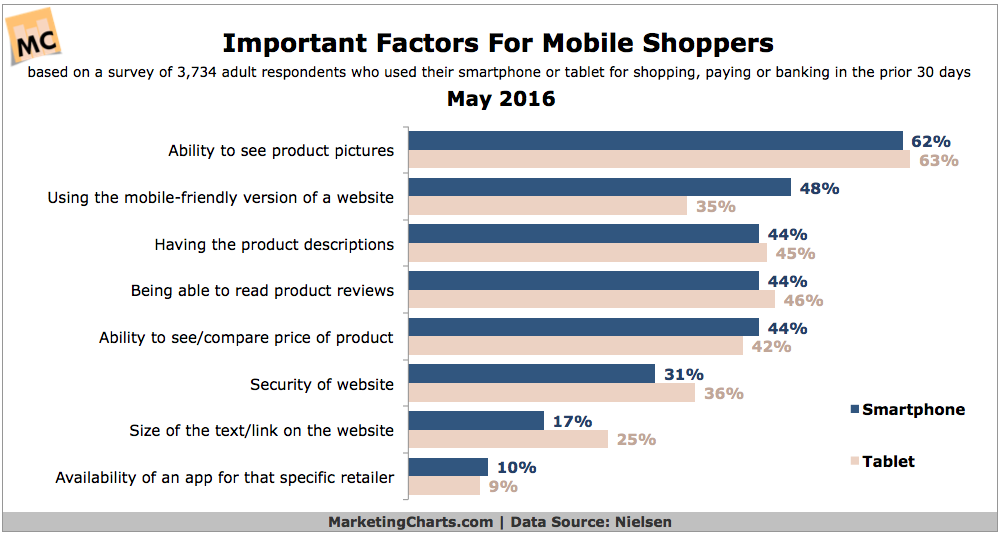 Mobile accounted for roughly 1 in every 6 retail dollars spent online during Q4 2015, per a recent report from comScore. With these devices gaining more influence on digital shopping and in-store buying, it’s important to understand what matters to mobile shoppers. A recent report from Nielsen provides some insights.

The Nielsen survey was carried out among more than 3,700 mobile device owners who had used their smartphone or tablet for mobile shopping, paying or banking in the prior 30 days. Conducted during Q4 2015, the results show that the most common shopping activity undertaken by both smartphone and tablet shoppers is researching an item before purchasing it (72% and 66% having done so in the prior 30 days, respectively). Additionally, the second-most common action, checking the price of an item, was shared by both smartphone and tablet shoppers (70% and 57%, respectively). This points to the use of mobile devices as research tools, which has been well documented in the past. (Indeed, new data from SessionM indicates that among users of its SessionM Mobile Marketing Cloud, mobile devices are more commonly used than desktops/laptops, in-store browsing and window shopping for researching products. Read the rest at MarketingCharts.com.