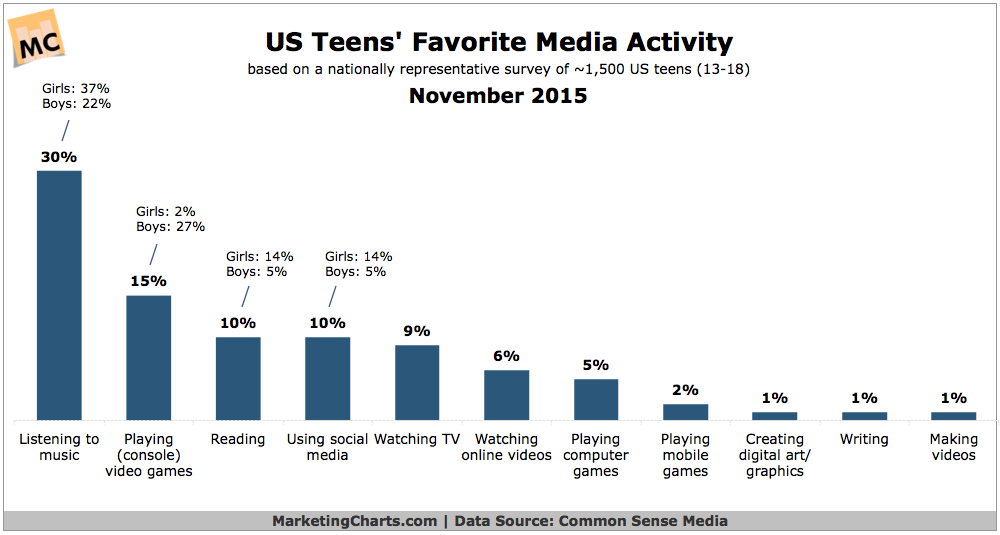 Teens (aged 13-18) in the US spend roughly 9 hours per day with media, including more than 6-and-a-half hours with screen media, reports Common Sense Media in a new study. Listening to music and watching TV emerge as the most frequent media activities among this demographic, though TV takes a backseat to video games among favored activities.

Listening to music tops the charts when it comes to enjoyable media activities, with close to three-quarters (73%) of teens saying they enjoy this activity “a lot.” TV trails in the second spot, bringing a lot of enjoyment to 45% of teens, rivaled by watching online videos (also 45%). Somewhat surprisingly again, social media is further down the list, with only 36% of teens saying they enjoy using social media “a lot.”

In fact, social media is passed on the enjoyment stakes by playing video games. While only 15% of teens reported playing console video games every day, 42% say they enjoy doing so “a lot.” And when teens were asked to identify their single favorite media activity, playing video games (15% share) fell second only to listening to music (30%). Social media ranked more highly on this measure, with 10% of teens saying it’s their favorite media activity, on par with reading (also 10%) and slightly ahead of watching TV (9%). Read the rest at MarketingCharts.