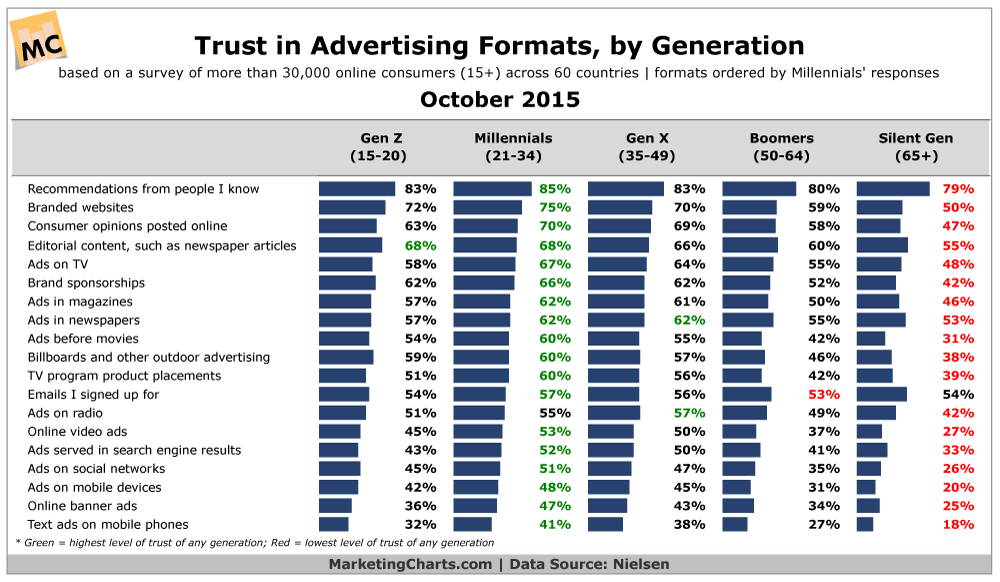 Nielsen has released its latest “Global Trust in Advertising” report, a biennial examination of the different forms of advertising that consumers around the world trust and act upon. This latest study indicates that despite the flow of budgets away from traditional media, advertising via these channels remains influential, even among younger age groups.

The survey – conducted online earlier this year among more than 30,000 consumers in 60 countries – indicates that Millennials (aged 21-34) report the highest levels of trust in almost all of the 19 formats listed (which include recommendations and consumer opinions online). In fact, the only format for which Millennials did not indicate the most trust was radio ads, where they were slightly edged by Gen Xers (35-49).

For the most part, though, there were only minor differences in the levels of trust shown by Millennials, Gen Z (ages 15-20) and Gen X (35-49) respondents. Several channels earn considerably less trust from older generations, with the Silent Generation generally the least trusting across formats. The biggest gaps in trust between Millennials and Silents were seen in formats including: branded websites; consumer opinions posted online; TV ads; brand sponsorships; ads before movies; billboard ads; and each of the digital formats identified. Read the rest at MarketingCharts.