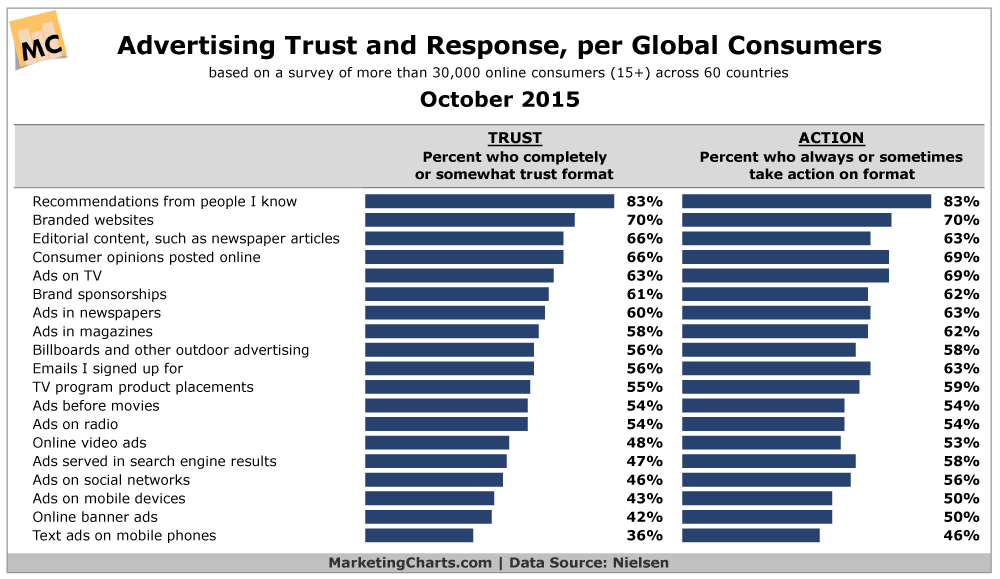 Nielsen has released its latest “Global Trust in Advertising” report, a biennial examination of the different forms of advertising that consumers around the world trust and act upon. This latest study indicates that despite the flow of budgets away from traditional media, advertising via these channels remains influential, even among younger age groups.

As Nielsen notes, “the proliferation of online ad formats has not eroded trust in traditional paid advertising channels.” In fact, among paid media channels, traditional media outperform online and mobile ads in trust; TV ads lead all paid media with 63% of global respondents reporting complete or somewhat trust, followed by newspaper (60%) and magazine (58%) ads. And the digital format that earns trust from the most respondents – online video ads (48%) – remains below radio and pre-movie ads (each at 54%), the least-trusted traditional media formats.

Surprisingly, the report finds little change in the results from the last edition released in 2013. Since then, ads on TV (+1% point) have seen a negligible increase in trust, while other traditional media formats such as print, billboards, radio and movies have seen declines of just 1-3% points. None of the digital formats analyzed – including online video, paid search, social ads, and mobile ads – saw an increase in trust from the last report, a fairly intriguing result given the proliferation of such advertising over the past couple of years. Read the rest at MarketingCharts.