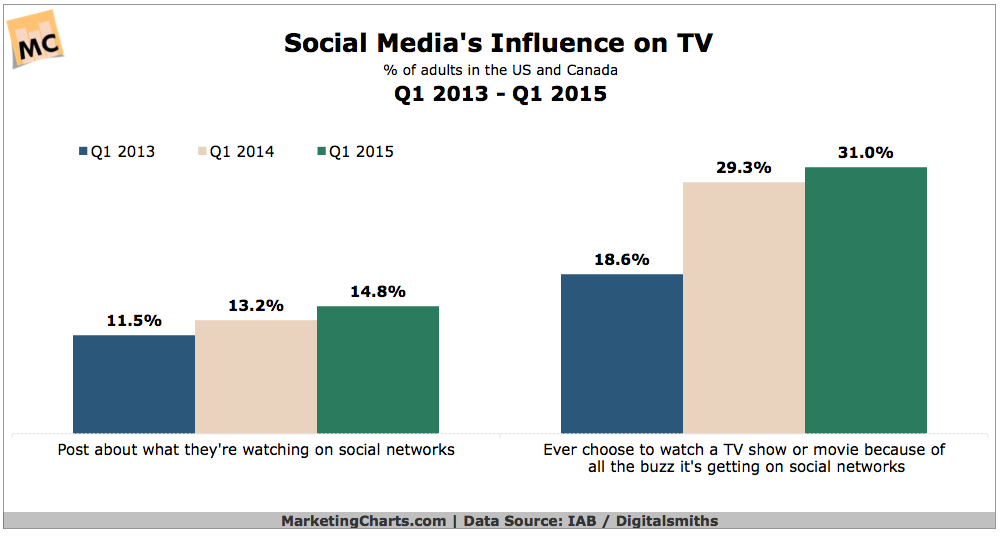 Some 31% of US and Canadian adults (18+) say they have at some point chosen to watch a TV show or movie because of all the buzz it was getting on Facebook, Twitter and other social networks, according to the latest quarterly video trends report from Digitalsmiths. But growth in this area appears to have slowed, based on a review of past editions of the study.

Indeed, going as far back as Q3 2013, a similar 30.8% of survey respondents said they had watched a show or movie due to social buzz. And while more than 1 in 7 respondents (14.8%) to the latest survey said they post about what they’re watching on social networks, that is actually slightly down from the percentage saying the same in Q3 2013 (15.4%). It’s possible that some of that may be due to seasonality, as the 31% this past quarter (Q1 2015) choosing a show based on social buzz is up from previous first quarters (2014; 29.3% and 2013; 18.6%). Similarly, the 14.8% posting about shows is up from 13.2% a year earlier, suggesting that social’s influence on TV is still growing, albeit slowly. Read the rest at MarketingCharts.