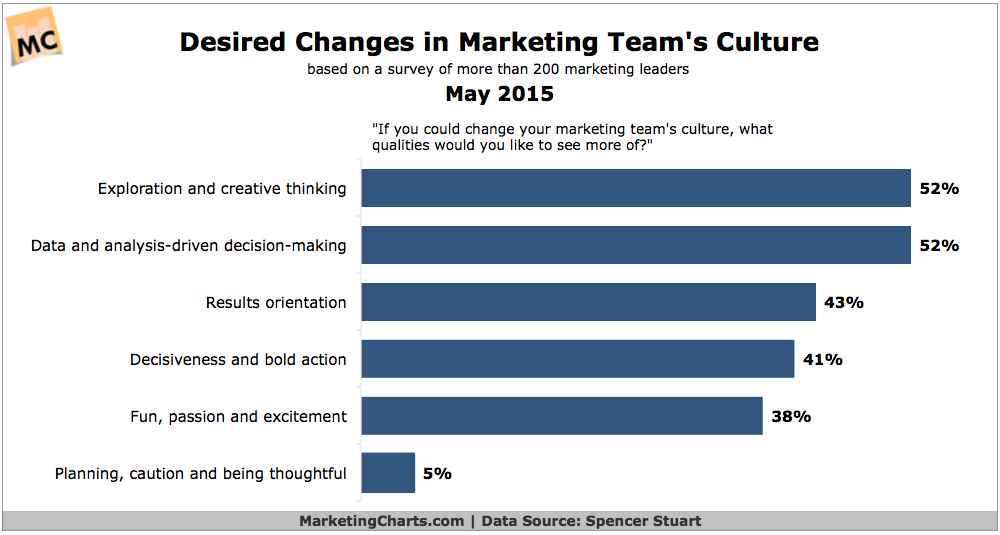 9 in 10 marketing leaders feel that culture plays a very (60%) or somewhat (30%) influential role in enabling the brand experience, but only about one-quarter believe that their team’s culture needs no change, details Spencer Stuart in a recent survey of more than 200 marketing leaders.

While a majority (52%) feel that only a “slight” change in team culture is needed, 1 in 5 feel that “significant” change is needed.

When asked what qualities they would like to see more of if they could change their marketing team’s culture, respondents pointed to both data and analysis-driven decision-making (52%) and exploration and creative thinking (52%). That both are viewed equally is an interesting result in light of separate survey results released last year by Spencer Stuart. In that study, 7 in 10 senior marketing leaders believed that creativity and analytical ability had been equally important for marketing leaders over the past few years. But, survey respondents felt that analytical orientation would become a more important skill for CMOs to possess, while creativity would become less of a priority over time. Read the rest at MarketingCharts.