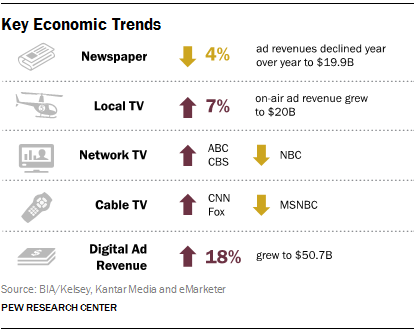 Financially, the newspaper industry continues to be hard-hit. Newspaper ad revenue declined another 4% year over year, to $19.9 billion – less than half of what it was a decade ago. The slight 1% growth in circulation revenue among publicly traded newspaper companies that make their data public suggests that gains there are far from making up for advertising losses. Alongside those declines, three different companies in 2014 spun off more than 100 newspaper properties, in large part so that their still-robust broadcast or digital divisions would not be affected by the newspaper industry’s continuing financial woes.

In contrast, local TV grew its on-air ad revenue to roughly equal that of newspaper ad revenue – $19.7 billion in 2014, according to BIA/Kelsey. That is up 7% from 2013 and 2% from 2010, the latter of which is perhaps more comparable to 2014 as it is the next most recent nonpresidential election year. News-producing stations, about two-thirds of all local TV stations, account for a disproportionate amount of this revenue. Retransmission fees, also on the rise, added another roughly $5 billion for the year, SNL Kagan estimates. Read the rest at Pew Research Center.