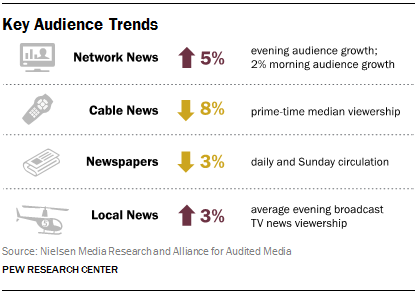 Even as mobile and social news habits evolve, legacy platforms have by no means been abandoned, though some are faring better than others. Local TV continues to capture broadcast viewers, with slight increases for evening (3%) and morning (2%) newscasts and larger ones for early morning and midday in 2014. Network television news saw a second straight year of audience growth (5% in evening and 2% in morning), for a combined average evening viewership of roughly 24 million.

Cable news, on the other hand, had another rough year, with prime-time median viewership down 8% across the three channels – Fox News, MSNBC and CNN. Fox News fared the best, but still saw a 1% decline year over year. And newspapers, after an unusual year of small gains in 2013, saw both daily and Sunday circulation fall another 3% in 2014, declines that were felt across papers of all sizes. Newspaper weekday circulation has now fallen 19% since 2004. Read the rest at Pew Research Center.