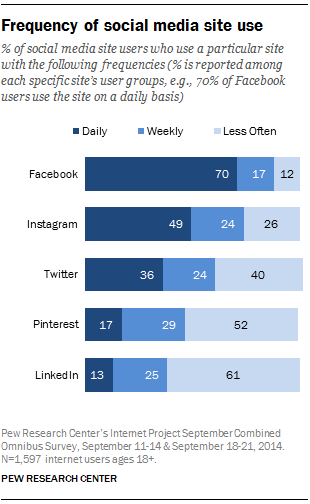 Facebook users are highly engaged with the platform. Fully 70% say they use Facebook daily (including 45% who do so several times a day), a significant increase from the 63% who visited daily in August 2013. Some 17% visit Facebook weekly, while 12% of users log on less often.

Almost half (49%) of Instagram users are on the platform daily, with 32% who say they go on Instagram several times a day. Another 24% say they check in weekly, while 26% visit Instagram less often than that. There were no significant changes since August 2013 in the proportion of Instagram users who use the site with varying degrees of frequency. Read the rest at Pew Internet.