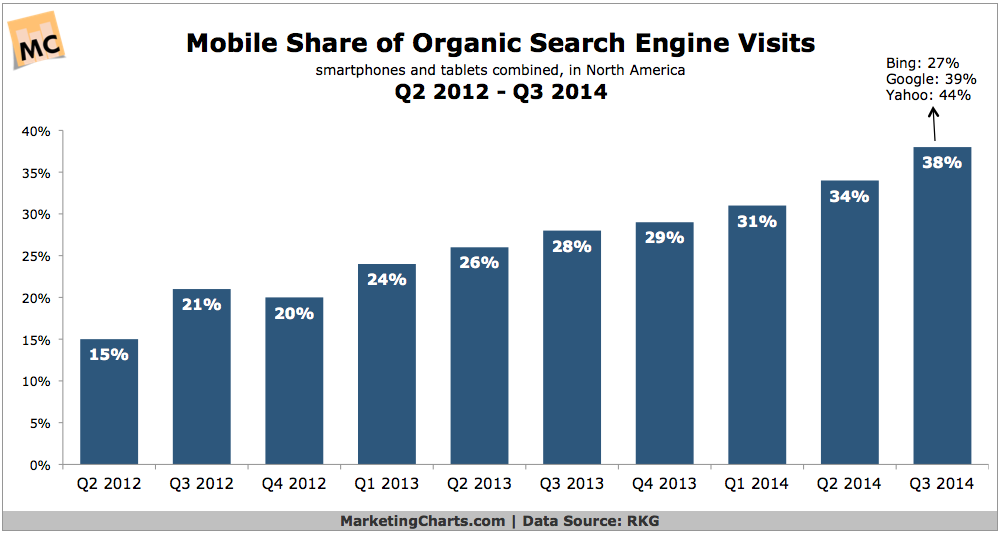 Mobile devices accounted for 38% of North American organic search visits during the third quarter of this year, up from 27% during the year-earlier period, details RKG Digital in its latest quarterly digital marketing report. The iPhone alone contributed 13% share of organic search traffic, slightly higher than the iPad’s 11% share, such that Apple devices together accounted for almost one-quarter of US organic search traffic. That’s about twice the share – 12% – of traffic contributed by Android mobile devices.

Mobile’s influence continued to be far higher on Google and Yahoo than on Bing, though mobile’s role jumped significantly for the latter in this past quarter. Overall, smartphones and tablets accounted for 39% of Google organic search traffic during the third quarter, up 3% points quarter-over-quarter and 10% points year-over-year. Mobile devices accounted for an even greater share – 44% – of organic search traffic on Yahoo. That represents a 7% point quarter-over-quarter increase and a 13% point jump from the year-earlier period. While Bing dragged down the overall average as a result of mobile being only 27% of its organic search traffic, that was an impressive 10-point jump from the preceding quarter. Read the rest at MarketingCharts.