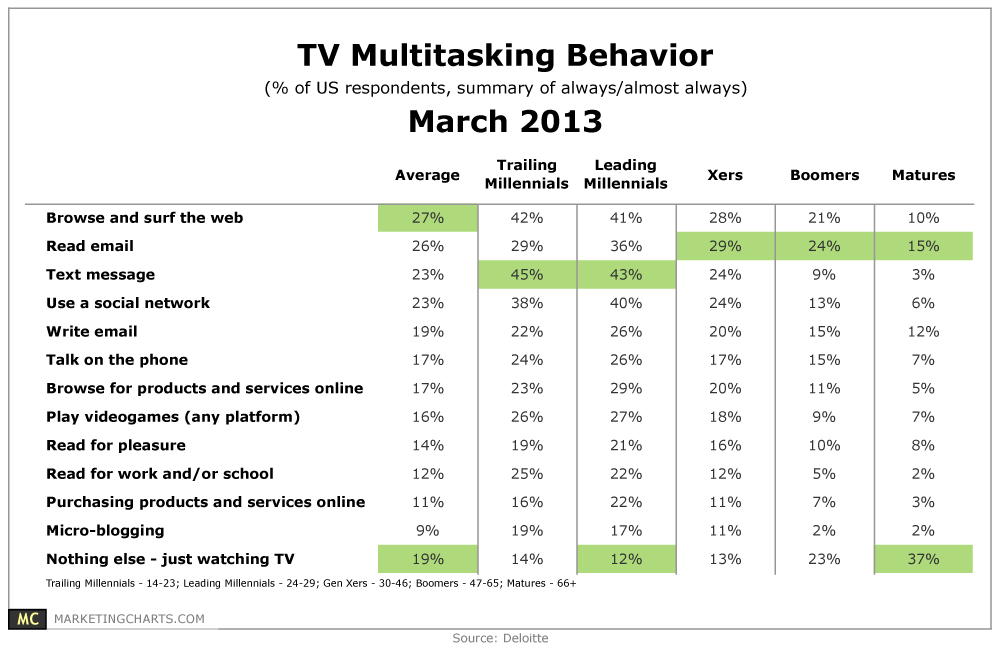 A recent MarketingCharts analysis of Nielsen data found slightly declining rates of traditional television consumption among youth, with steadier rates among older Americans. But as TV increasingly becomes part of a multi-screen experience, how many viewers are multitasking? New survey results from Deloitte indicate that 81% of Americans almost always or always engage in another activity while watching their home TV, with that figure rising to a high of 88% among 24-29-year-olds.

While this can detract from the TV experience, it can also enhance it. For example, Nielsen yesterday reported that it had found a correlation between Twitter buzz and TV ratings. Significant numbers of consumers around the world are indeed using their mobile devices to discuss TV programs on social networks as they watch them, even if Americans appear to be behind the curve in that regard.

Still, multi-screening behavior tends to favor unrelated over related content. The fear, of course, is that multi-tasking distracts viewers, with a negative effect for advertisers. That’s a real concern, given the wide variety of activities that youth engage in while watching TV, from browsing the web (42% of 14-23-year-olds) to text messaging (45% of that group), playing video games (27% of 24-29-year-olds) and even reading (25% of 14-23-year-olds). Read the rest at MarketingCharts.